Postpartum PTSD Is Real. I Should Know — I’ve Lived It 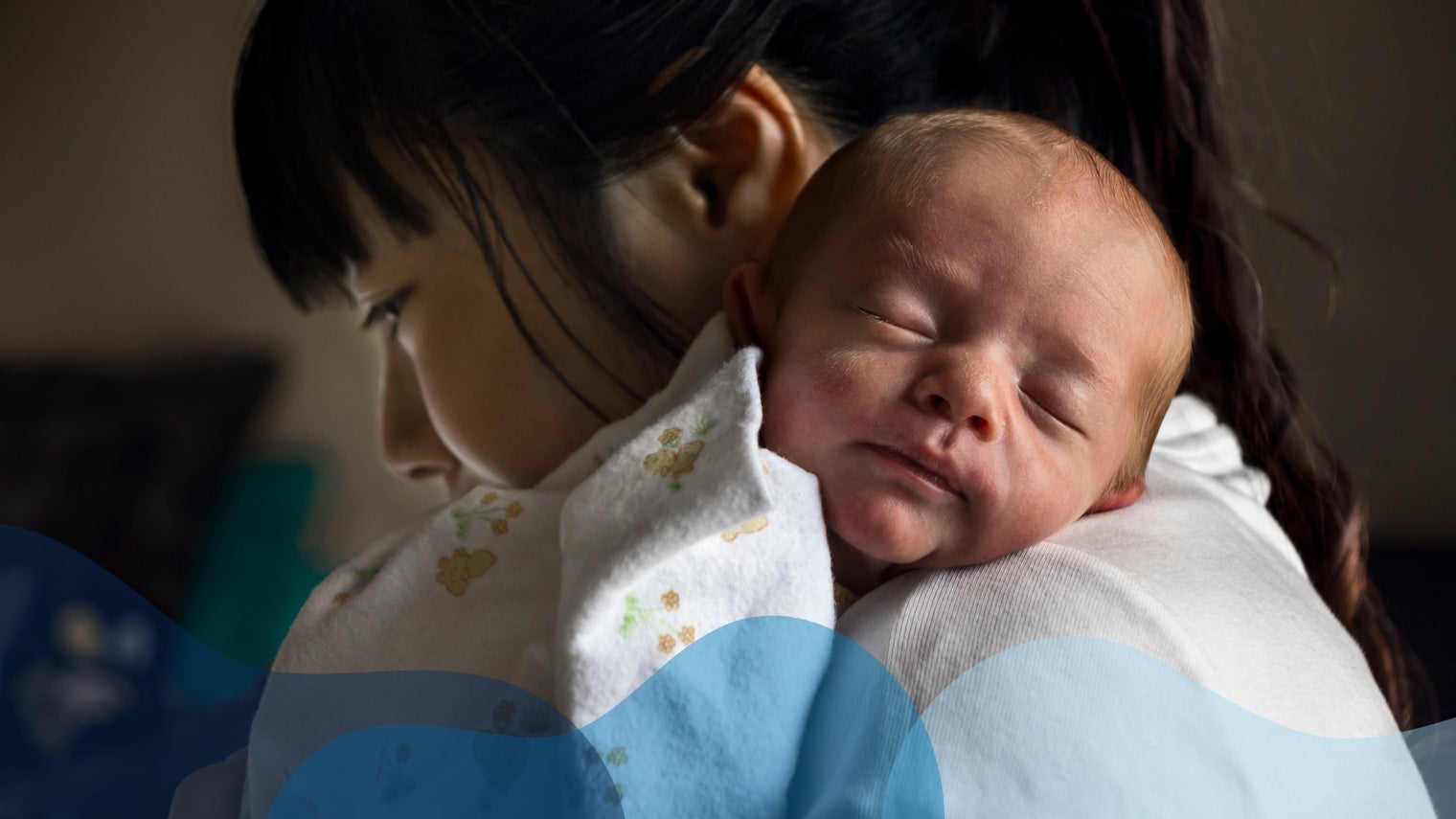 Something as simple as a yoga pose was enough to send me into a flashback.

“Close your eyes. Relax your toes, your legs, your back, your belly. Relax your shoulders, your arms, your hands, your fingers. Take a deep breath, put a smile on your lips. This is your Savasana.”

I am on my back, legs open, knees bent, my arms at my side, palms up. A spicy, dusty scent drifts from the aromatherapy diffuser. This scent matches the damp leaves and acorns patching the driveway beyond the studio door.

But a simple trigger is enough to steal the moment from me: “I feel like I’m giving birth,” said another student.

It wasn’t that long ago that I’d given birth on what would be the most frightening day, and most difficult period of my life.

I returned to yoga as one of many steps on the way to physical and mental recovery the following year. But the words “giving birth,” and my vulnerable position on the yoga mat that fall afternoon, conspired to ignite a powerful flashback and panic attack.

Suddenly, I was not on a blue yoga mat on a bamboo floor in a dim yoga studio dappled with late afternoon shadows. I was on a hospital operating table, bound and half paralyzed, listening for the cry of my newborn daughter before I sank into anesthetic blackness.

It seemed I had only seconds to ask, “Is she OK?” but I was afraid to hear the answer.

Between long periods of blackness, I moved toward the surface of consciousness for moments, rising just enough to see light. My eyes would open, my ears would catch a few words, but I didn’t wake up.

I wouldn’t really wake up for months, motoring through a fog of depression, anxiety, NICU nights, and newborn madness.

That November day, a spare yoga studio transformed into the hospital critical care unit where I had spent the first 24 hours of my daughter’s life, arms extended and restrained.

“Eternal Om” plays in the yoga studio, and each deep moan causes my jaw to clamp tighter. My mouth is slammed shut against a gasp and a yelp.

The small group of yoga students rested in Savasana, but I laid in a hellish war prison. My throat choked, remembering the breathing tube and the way I pleaded with my whole body to be allowed to speak, only to be smothered and restrained.

My arms and fists tightened against the phantom ties. I sweated and fought to keep breathing until a final “namaste” set me free, and I could run out of the studio.

That night, the inside of my mouth felt jagged and gritty. I checked the bathroom mirror.

I’d been so dissociated from the present, I didn’t notice until hours later: As I lay in Savasana that afternoon, I clenched my teeth so hard I’d shattered a molar.

My daughter was scheduled to be delivered by cesarean section on a perfectly normal July morning.

I texted with friends, took selfies with my husband, and consulted with the anesthesiologist.

As we scanned the consent forms, I rolled my eyes at the unlikelihood of this birth narrative going so sideways. Under what circumstances could I possibly need to be intubated and put under general anesthesia?

No, my husband and I would be together in the cold operating room, our views of the messy bits obscured by generous blue sheets. After some eerie, numbed tugging at my abdomen, a spasming newborn would be placed next to my face for a first kiss.

This is what I had planned. But oh, it did go so sideways.

In the operating room, I took slow, deep breaths. I knew this technique would ward off panic.

The obstetrician made the first superficial cuts into my belly, and then he stopped. He breached the wall of blue sheets to speak to my husband and me. He spoke efficiently and calmly, and all levity had evacuated the room.

“I can see that the placenta has grown through your uterus. When we cut to take the baby out, I expect there to be a lot of bleeding. We may have to do a hysterectomy. That’s why I want to wait a few minutes to have blood brought up to the OR.”

“I’m going to ask your husband to leave while we put you under and finish the surgery,” he instructed. “Any questions?”

I stopped taking slow deep breaths. I choked on fear as my eyes darted from one ceiling square to the next, unable to see beyond into the horror at which I was centered. Alone. Occupied. Hostage.

My baby emerged and yelped as I receded. As our bodies were ripped apart, our states of consciousness reversed.

She replaced me in the fracas while I sank away into a black womb. No one told me if she was OK.

I woke up hours later in what felt like a war zone, the post-anesthesia care unit. Imagine 1983 news footage of Beirut — carnage, screaming, sirens. When I awakened after surgery, I swear I thought I was in the wreckage myself.

Afternoon sun through the high windows cast everything around me in silhouette. My hands were tied to the bed, I was intubated, and the next 24 hours were indistinguishable from a nightmare.

I heaved myself to the surface, wrote on a clipboard, “My baby???” I grunted around the choking tube, jabbed the paper at a passing shape.

“I need you to relax,” the silhouette said. “We’ll find out about your baby.”

I dipped back under the surface. I fought to stay awake, to communicate, to retain information.

At about 2 a.m. — more than half a day after she was pulled from me — I met my daughter face-to-face. A neonatal nurse had spirited her across the hospital to me. My hands still bound, I could only nuzzle her face and let her be taken away again.

The next morning, I was still captive in the PACU, and elevators and corridors away, the baby wasn’t getting enough oxygen. She had turned blue and been moved to the NICU.

She remained in a box in the NICU while I went alone to the maternity ward. Twice a day, at least, my husband would visit the baby, visit me, visit her again, and report to me every new thing they thought was wrong with her.

The worst thing was never knowing how long this could go on. No one would even estimate — 2 days or 2 months?

I escaped downstairs to sit by her box, then back up to my room where I had a series of panic attacks for 3 days. She was still in the NICU when I went home.

The first night back in my own bed, I could not breathe. I was sure I’d accidentally killed myself with a mixture of pain medication and sedatives.

The next day in the NICU, I watched the baby struggle to eat without drowning herself. We were one block from the hospital when I broke down in the drive-through lane of a fried chicken franchise.

The drive-through speaker clucked through my unmitigated sobbing: “Yo, yo, yo, want some chicken to go?”

It was all too absurd to process.

A few months later, my psychiatrist congratulated me on how well I was handling having a NICU baby. I had walled up the apocalyptic fear so well that even this mental health professional couldn’t see me.

That fall, my grandmother died, and no emotions stirred. Our cat died at Christmas, and I offered mechanical condolences to my husband.

For more than a year, my emotions were only visible when triggered — by visits to the hospital, by a hospital scene on TV, by a birth sequence at the movies, by a prone position at the yoga studio.

When I saw images from a NICU, a fissure opened in my memory bank. I fell through the crack, back in time to my baby’s first 2 weeks of life.

When I saw medical paraphernalia, I was back at the hospital myself. Back in the NICU with baby Elizabeth.

I could smell the clinking of metal tools, somehow. I could feel the stiff fabrics of protective gowns and newborn blankets. Everything clinked around the metal baby cart. The air abraded. I could hear the electronic beeps of monitors, the mechanical whirs of pumps, the desperate mews of tiny creatures.

I craved yoga — a few hours every week when I was unsaddled from the responsibility of doctor’s visits, parental guilt, and the constant terror that my baby wasn’t OK.

I committed to weekly yoga even when I couldn’t catch my breath, even when my husband had to talk me out of skipping it every time. I talked to my teacher about what I was going through, and sharing my vulnerability had the redemptive quality of a Catholic confession.

More than a year later, I sat in the same studio where I had experienced my most intense PTSD flashback. I reminded myself to unclench my teeth periodically. I took special care to stay grounded during vulnerable poses by focusing on where I was, the physical details of my environment: the floor, men and women around me, my teacher’s voice.

Still, I fought the room morphing from dim studio to dim hospital room. Still, I fought to release the tension in my muscles and to discern that tension from external restraints.

At the end of class, we all stayed behind and arranged ourselves around the perimeter of the room. A special ritual was planned, to mark the end and beginning of a season.

Again, my breath rushed in…

I felt the rhythm of cool air flowing in, being transformed by my belly into a warm, deep lowing, my voice indistinguishable from 20 others.

It was the first time in 2 years I had inhaled and exhaled so deeply. I was healing.