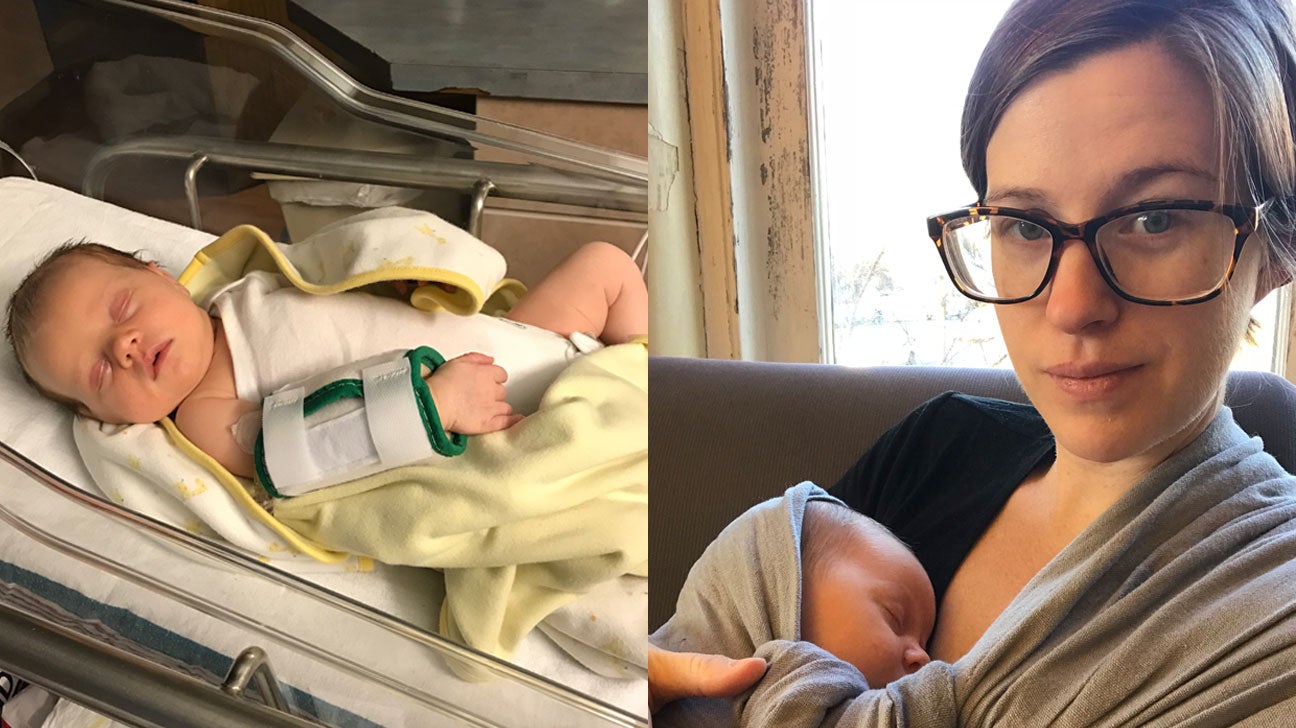 Typing out my concerns in the middle of nursing or during nap time became natural and truly therapeutic.

Health and wellness touch each of us differently. This is one person’s story.

It was 8:00 p.m. when I handed the baby to my husband so that I could lay down. Not because I was tired, which I was, but because I was having a panic attack.

My adrenaline was increasing and my heart pounding, all I could think was I can’t panic right now because I have to take care of my baby. That thought nearly overpowered me.

My daughter was 1 month old the night I laid on the floor with my feet in the air, trying to force the blood back into my head to stop the world from spinning.

My anxiety had been quickly getting worse since my newborn’s second hospitalization. She had breathing issues at birth, then contracted a serious respiratory virus.

We’d rushed her to the ER twice in her first 11 days of life. I watched as her oxygen monitors dipped dangerously low every few hours between breathing treatments. While in the children’s hospital, l overheard several Code Blue calls, meaning somewhere close a child had stopped breathing. I felt scared and powerless.

Margret Buxton, a certified nurse midwife, is the regional director of clinical operations for Baby + Company birthing centers. While postpartum anxiety and birth-related PTSD affects 10 to 20 percent of women in the United States, Buxton tells Healthline that “maybe 50 to 75 percent of our clients need a higher level of support through the postpartum journey.”

Postpartum depression and postpartum psychosis are classified as separate diagnoses, but anxiety is listed only as a symptom.

I wasn’t depressed. Nor was I psychotic.

I was happy and bonding with my baby. Yet I was completely overwhelmed and terrified.

I couldn’t move past the memories of our close calls. I also had no idea how to get help while caring for two small children.

There are other women like me out there. The American College of Obstetricians and Gynecologists (ACOG) recently published an update telling physicians that best practice is to contact new moms before the typical six-week appointment to see how they’re doing. This seems like common sense, but ACOG writes that currently women navigate the first six weeks themselves.

Postpartum depression and anxiety, while typically not long-lasting, can significantly impact maternal-child bonding and quality of life. The first two to six weeks are the most critical time for addressing postpartum mental health, which can make accessing treatment extremely difficult. This time is also typically the period where new parents are getting the least sleep and social support.

Deciding it was time to get help

While I was bonding with my baby just fine, my postpartum anxiety was taking a huge toll on my emotional and physical health.

Every day I was on the verge of panic, repeatedly checking and rechecking our daughter’s temperature. Each night she slept in my arms attached to a home oxygen monitor that I never fully trusted.

I spent 24 hours convinced her soft spot was bulging, which would have indicated too much pressure in her skull from a serious infection. I took dozens of pictures to monitor it, drawing arrows and highlighting areas to text to our pediatrician.

My husband knew after my panic attack that this was more than we could work through ourselves. He asked me to get some professional help so I could enjoy my baby and finally get some rest.

He was so relieved and grateful to have a healthy baby, while I sat paralyzed by fear that something else was coming to take her away.

One barrier to getting help: I wasn’t ready to take my newborn to a traditional therapy appointment. She nursed every two hours, it was flu season, and what if she cried the whole time?

My anxiety played a role in keeping me home, too. I imagined my car breaking down in the cold and being unable to keep my daughter warm or someone sneezing near her in the waiting room.

One local provider made house calls. But at nearly $200 per session, I wouldn’t be able to afford many appointments.

I also knew that waiting a week or more for an appointment only to turn around and wait days or weeks for my next appointment was just not fast enough.

Fortunately, I found a different form of treatment: teletherapy.

Talkspace, BetterHelp, and 7Cups are companies that provide support from licensed clinical therapists through your phone or computer. With different formats and plans available, they all offer affordable and easily accessible mental health services to anyone with internet access.

After years of previous therapy, I have absolutely no problems sharing my problems or my past. But there’s something a little harsh and blunt about seeing it all in text message form.

For the cost of a single traditional in-office session I was able to get a month of daily therapy via an app. After answering a few questions, I was matched with several licensed therapists to choose from.

Having a therapeutic relationship just through my phone was awkward at first. I don’t actually text much daily, so writing out my life story in massive messages took some getting used to.

The first interactions felt forced and oddly formal. After years of previous therapy, I have absolutely no problems sharing my problems or my past. But there’s something a little harsh and blunt about seeing it all in text message form. I remember rereading a section to make sure I didn’t sound like an unfit, psychotic mother.

After this slow start, typing out my concerns in the middle of nursing or during nap time became natural and truly therapeutic. Just writing down “I saw how easily it would be to lose my baby and now I’m just waiting for her to die” made me feel a tiny bit lighter. But having someone understanding write back was an incredible relief.

Often, I’d get texts back both morning and night, with everything from general support and suggested action steps to prompting me to answer difficult and probing questions. The service I used allows users to send unlimited messages in a private texting platform with the assigned therapist reading and responding at least once a day, five days a week. Users can send video and voice messages instead of text or even jump into group therapy chats moderated by licensed therapists.

I avoided these for weeks, fearing my unwashed, exhausted mom exterior would make my therapist want to commit me.

But I’m a talker naturally and the most healing thing I did was finally just letting myself freely talk via video or voice message, without being able to reread and edit my thoughts.

Typing out my concerns in the middle of nursing or during nap time became natural and truly therapeutic.

That frequency of communication was invaluable in dealing with my acute anxiety. Whenever I had something to report I could just jump in the app to send a message. I had somewhere to go with my worry and was able to start working through the events that made me feel stuck.

I also had live monthly video calls, which I did from my couch while my daughter nursed or slept just outside the frame.

So much of my anxiety is tied to my inability to control things, so we focused on what I could control and fought my fears with facts. I worked on relaxation techniques and spent a lot of time working on gratitude and hope.

As my acute anxiety faded, my therapist helped me create a plan to find more social support locally. After a few months we said goodbye.

I reached out to moms I knew and set up play dates. I joined a local women’s group. I kept writing about everything. I even went to a rage room with my best friend and broke things for an hour.

Being able to find support quickly, affordably, and without putting more stress on myself or my family has speeded my recovery. I’d urge other new moms to add teletherapy to their list of options, if they do need support.