These Women Changed Their Diets to Manage Their Anxiety and Depression. Here’s What They Ate. 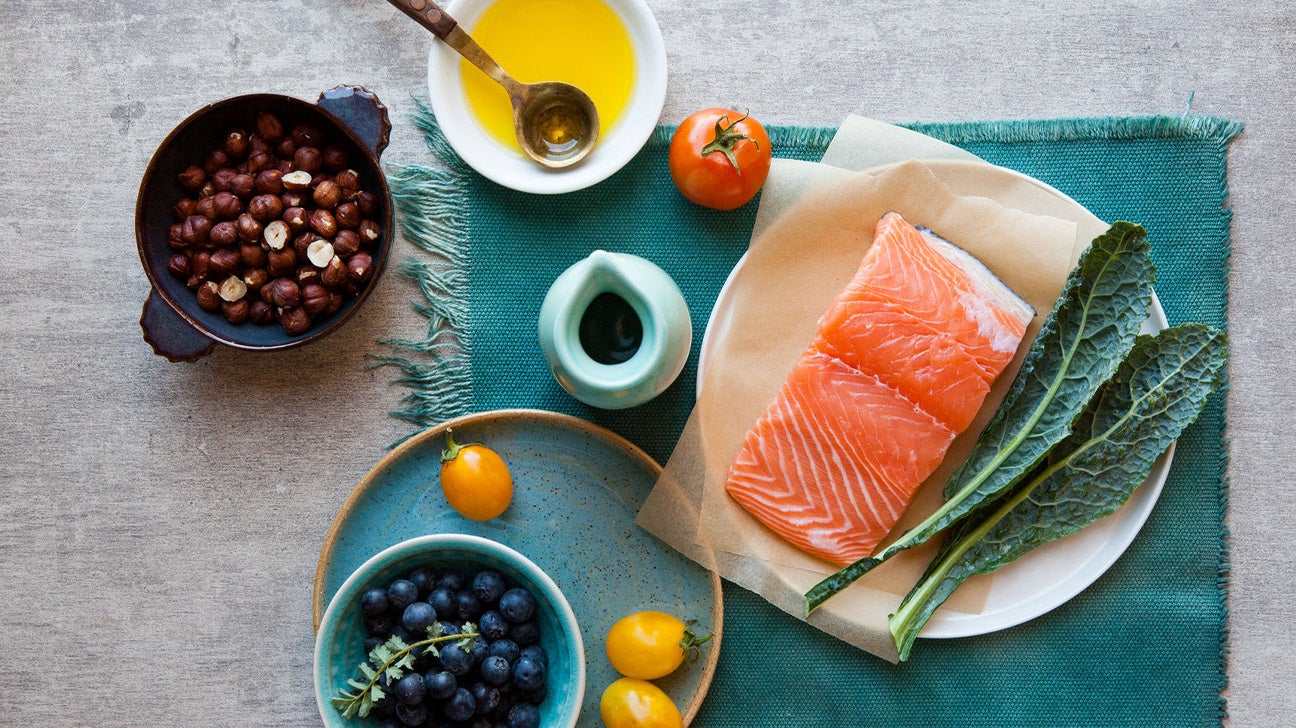 Science agrees that food can be a powerful tool for people dealing with depression and anxiety.

When Jane Green was 14 years old, she was walking offstage from a tap dance competition when she collapsed.

She couldn’t feel her arms, her legs, or her feet. She was hysterically crying, and her whole body was hot. She was gasping for breath.

Green blacked out for 10 minutes. When she came to, her mom was holding her. It took 30 minutes for her heart rate to calm down enough so she could breathe.

Green was having a panic attack — her first one, but not her last. Her parents took her to the doctor, who diagnosed her with anxiety and depression, and handed her a prescription for an antidepressant.

“I’ve had good times, but I’ve also had really low points. Sometimes it got to the point where I didn’t want to live anymore,” Green shares with Healthline.

More doctors’ visits also revealed she had an irregular thyroid, which didn’t help with her anxiety. She started seeing a therapist at 20, which helped — but only so much.

At 23, after a particularly hard visit with her doctor who told her there was nothing that could be done about her symptoms, Green had a meltdown in front of her friend Autumn Bates.

Bates was a nutritionist who had overcome her own anxiety issues by changing her diet. She convinced Green to switch up her diet to see whether it made her feel any better.

Green already ate a fairly balanced diet, but dinner was often takeout. Sugar was a daily must-have, with candy throughout the day and ice cream at night.

Her new diet guidelines encouraged more vegetables and healthy fats, medium amounts of protein, and cutting back on refined grains, dairy, and sugar.

Green started reaching for nuts as a snack, stuck to salmon or homemade burgers with veggies for dinner, and savored the small piece of dark chocolate she ate for dessert.

The changes were tough at first. But she soon noticed her energy levels soaring.

“I wasn’t focusing on what I couldn’t eat — I was focusing on how great I felt physically, which made me feel better mentally and emotionally,” she adds. “I stopped getting the crazy highs and lows from sugar. I actually have bowel movements now, which makes such an impact on my mood.”

As for those anxiety attacks? “I haven’t had an anxiety attack in months,” Green says. “I’m completely off my antidepressants, which I 100 percent attribute to my diet and lifestyle changes.”

It’s important to remember that stopping any medication, including antidepressants, without consulting your doctor first may not be safe. If you’re considering making changes to your diet and medication, talk with your doctor to determine whether reducing or stopping your medication may be an option for you.

The foods that may help and hurt your mental health

“Changing your nutrition can be a great addition to traditional therapy, like CBT and medication, [but it] comes at a much smaller cost and can be a great way to self-care,” says Anika Knüppel, a postdoctoral researcher in nutritional epidemiology at the University of Oxford and contributor to the European MooDFOOD program, which focuses on preventing depression through food.

There are two ways nutritional interventions may help mental health: by increasing healthy habits and reducing unhealthy ones. For the best outcome, you have to do both, says Knüppel.

Research has shown the most support for two diets: the Mediterranean diet, which emphasizes more healthy fats, and the DASH diet, which focuses on reducing sugar.

The Mediterranean diet is more about what you’re adding in: fresh fruits and vegetables, protein-rich legumes, and fatty fish and olive oil (high in omega-3s).

One small 2017 study with 67 people who were clinically depressed, some being treated with medication, looked at diet’s role in the participants’ mental health. Researchers found that after 12 weeks of eating a modified Mediterranean diet, the participants’ symptoms were significantly better.

In a 2016 study with 11,800 people, researchers found that those who followed the Mediterranean lifestyle closest were 50 percent less likely to develop depression than those who didn’t follow the diet as well.

And in 2018, a study in older adults found that following a Mediterranean diet was related to the absence of depression.

Alternatively, the DASH diet is about what you’re taking out, namely sugar.

A 2017 study that Knüppel led analyzed the sugar intake of more than 23,000 people. Researchers found that men who ate the most sugar — 67 or more grams a day, which is 17 teaspoons of sugar (or just under two cans of Coke) — were 23 percent more likely to develop common mental disorders over 5 years than participants in the bottom third who logged fewer than 40 grams of sugar a day (10 teaspoons).

And a 2021 study reports that among older adults, those who closely followed the DASH diet were less likely to develop depression over 6.5 years compared with those who followed a typical Western diet.

Foods that may help with depression

Still, it may not hurt to add these nutritious foods to your regular diet.

A 2015 review of studies on diet and depression found that 75 percent of the diet programs that resulted in an improvement in depression outcomes recommended eating a diet high in fiber, fruits and vegetables, or both.

These foods are high in vitamins and minerals, which may be helpful in preventing symptoms of depression.

A 2021 review of researchTrusted Source found that people with depression may consume less essential vitamins and minerals. Researchers noted that vitamin A, vitamin C, and vitamin E help the body protect the brain from disorders such as anxiety and depression and cognitive decline.

Foods high in vitamin A include:

Foods high in vitamin C include:

Foods high in vitamin E include:

Low levels of vitamin D are found to be correlated with depression. Foods high in vitamin D include:

Finally, eating foods high in vitamin K was associated with lower symptoms of depression. These foods include:

A 2018 study of older adults found that drinking tea daily may be associated with a lower risk of depression.

A 2019 meta-analysis found that omega-3 supplements may be effective at reducing symptoms of depression.

Foods high in omega-3s include:

A 2020 review of research found that lower levels of vitamin B12 may be associated with an increased risk of depression.

Foods high in vitamin B12 include:

A different 2020 review of research found that magnesium supplements may benefit people with anxiety. However, more research is needed to support this.

A 2021 review of research found that in low income countries, certain whole plant extracts may help reduce symptoms of depression. These include:

Learn more about herbal supplements for depression and anxiety.

Simply removing sugar has been life-changing for Catherine Hayes, a 39-year-old Australian mom who was in and out of mental health counseling offices, and on and off antidepressants for the better part of her life.

“My moods would be up and down — mostly down. I had feelings of not being good enough, and some days I wanted to die. Then there was the anxiety to the point I couldn’t leave my house without becoming violently ill,” Hayes explains.

It wasn’t until she realized how much it was affecting her family, and that she wanted to get better for her kids, that she started looking at alternative therapies. Hayes started doing yoga and found the book “I Quit Sugar.”

At the time, Hayes was eating packets of cookies with coffee in the afternoon and craving dessert before she even ate dinner.

“My new way of eating consisted of lots of greens and salads, healthy fats, protein from meat, switching sweet dressings for olive oil and lemon juice, and limiting fruits to those with low fructose like blueberries and raspberries,” she says.

Giving up sweets wasn’t easy. “In that first month of coming off sugar, I was tired with headaches and flu-like symptoms,” Hayes said.

But at the 1-month mark, everything changed. “My energy levels picked up. I was finally sleeping. My moods weren’t as low. I was happier, and the anxiety and depression just didn’t seem to be there,” Hayes says.

Now, years after going sugar-free, she’s been able to taper off her antidepressants. “It’s not for everyone, but this is what worked for me,” Hayes says.

The connection between food and mental health

Since we don’t have all the answers, biologically, behind anxiety and depression, there’s no clear reason why changing your diet can’t change your mood, Knüppel says.

But we do know a few things.

“Vitamins in the body help the function of enzymes that enable reactions such as the synthesis of serotonin, which plays an essential role in our happiness,” Knüppel explains.

Meanwhile, 2019 research found that too much sugar is linked not only to the development of anxiety and depression but also to cognitive impairments and a reduction in the brain’s ability to develop new connections when learning or after injury.

“The microorganisms in our gut can communicate with the brain and several systems that could play a role in depression and anxiety, and the composition of the gut microbiota is influenced by nutrition,” Knüppel adds.

Michael Thase, MD, psychiatrist and director of the Mood and Anxiety Program at the University of Pennsylvania, says there are a few other factors at play here.

“When you treat depression with medication, the actual ‘magical’ chemical ingredients matter maybe 15 percent. It’s really the process of working with a doctor and finding the motivation to recognize the problem and take steps toward fixing it that counts for most of the good,” Thase says.

“You can get that much of the good in a non-medication intervention that includes diet, exercise, and talking to someone,” he says.

Working toward getting the nutrition you need certainly counts as self-care for depression. “Your spirits pick up and that’s an antidepressant,” Thase adds.

You can take medication for depression, attend therapy, and also try these complementary approaches to help improve your mental health.

Knüppel says: “Diet is a great way of active self-care and self-love — a key in cognitive behavioral therapy (CBT), which is often used to treat anxiety and depression. I believe seeing oneself as worthy of self-care and therefore worthy of being fed with nutritious food is a great step.”

Why certain foods are mood-boosting

Should you try it?

No treatment is perfect, and no treatment works for everyone, Thase states. Both Thase and Knüppel agree that if you have depression or anxiety, your first step should be getting help from a mental health professional.

But trying out nutritional changes in parallel with whatever steps you and your doctor decide may potentially bolster the improvements.

“I’m all in favor of helping people take a look at their fitness and diet as a holistic plan to help recover from depression, but I wouldn’t count on it solely,” Thase says.

And even though Thase doesn’t incorporate nutritional interventions with his patients, he adds that he could see this becoming another tool for psychiatrists and other mental health professionals to consider in the future.

“There is a real movement toward mindfulness and holistic approaches in our culture right now, and in psychiatry, there’s a movement toward personalized medicine, in the sense that our patients are the captains of their own ship and their own treatment planning,” he explains.

As people become more interested in alternative therapies like this and continue to see results, you may see more mainstream docs writing prescriptions for healthy foods in the future.